For One Who Knows How to Own Land Released 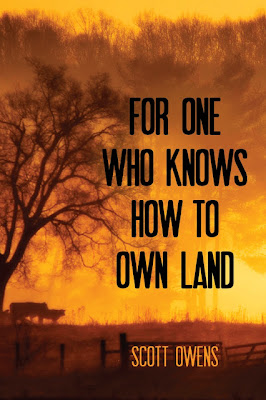 My new book was just released by Future Cycle Press yesterday. Here is some information about it.

Scott Owens describes his new volume of poetry: I grew up in two worlds: my father’s parents’ world of brick homes, city streets, shopping, and playgrounds; and my mother’s parents’ world of dirt roads, livestock, growing our own food, and endless woods. That second world was undeniably harder than the first. The work was dirtier, and there was more of it. The homes had fewer luxuries: no cable, no AC, never more than one bathroom. Even death was different. In town, death was a polished event that took place elsewhere: hospitals, nursing homes, slaughter houses, funeral parlors. On the farm, animals were killed every week and most people died at home, and their bodies stayed there until they were buried.

Somehow, however, that second world still seemed much more alive, much more real and vital. Despite that vitality, I was aware that most people knew almost nothing about that second world. It was then, and is increasingly now, an undiscovered country where life and death exist side by side with a natural intensity missing from the artificial world of the city.

This book, Owens tells us, dedicated to my grandfather (one who knew how to own land), is a record of my undiscovered country and the people who lived there.

“Landscape and memory are seamlessly merged in this excellent volume. Like all the best writers of place, Scott Owens finds the heart’s universal concerns in his vivid rendering of piedmont Carolina.” —Ron Rash, Parris Distinguished Professor in Appalachian Cultural Studies at Western Carolina University

“There’s not a speck of sentimentality in the rural poetic Americana framed by Scott Owens in For One Who Knows How to Own Land. There are dead crows, red dirt earth, barking dogs, burning coal, fox traps, and flooding rivers. These stories matter. The poems all rattle and sing. This is a jolt of strong coffee for a watery time.” —John Lane, author of The Woods Stretched for Miles: Contemporary Nature Writing from the South

“In For One Who Knows How to Own Land, poet Scott Owens creates, with a mature voice, childhood reminiscences of pastoral summers in the red-dirt rural Piedmont of upstate South Carolina. This, his most affecting collection to date, is a remarkable sensory journey that registers narrative moments along the entire emotional scale from harsh to tender, from the threatening to the anodyne. Through the magical nature of memory, these poems of mystery and loss prove again and again that ‘The boy who left this country/ never stopped hearing its names/ echo in his ear.’” —Tim Peeler, author of Checking Out

“‘Why should this be home?’ Scott Owens asks us in ‘Homeplace,’ his question as much about leaving as going back. We walk his train tracks and ridges as if they were our own, as though home were ‘something you held tight before you,/ your back bending against its going away.’ In this both visceral and meditative rendering of place, decay and rebirth are part of the same landscape. I applaud the skill that directs us down a path of experience and familiarity to ‘stone steps/ that dead-end in mid-air.’ His poetry is wise in knowing the weight of its own footsteps.” —Linda Annas Ferguson, author of Dirt Sandwich

Labels: For One Who Knows How to Own Land, Future Cycle Press