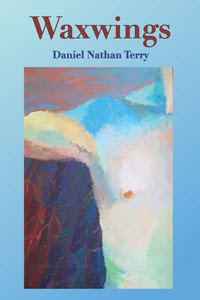 Daniel Nathan Terry’s book of poems, Waxwings, is a powerful exploration of the internal and external forces surrounding the phenomenon of personality development.

From the very first poem, “Scarecrow,” the reader is invited into an internal drama that begins with the recognition of identity as an artifact, a creation, a projection of the individual’s concept of self, tested, influenced, re-tested, and ultimately determined against the backdrop of familial and social expectations and pressures. Successfully employing an ambiguity that seems almost whimsical at the same time it is somehow disturbing, this modern-day Pygmalion refers to himself as “Scarecrow crafter, burlap-tailor, / black-eye smudger” and claims such prowess in his crafting that “crows mistake you for a man.” As in the original Greek myth of Pygmalion, the creator has a rather intimate relationship with the creation as he “fisted through your flannel” and “perfumed your thighs with summer sweet.” Not surprisingly given that level of intimacy, the distinctions between creator and created become blurred as the speaker worries about “flies . . . who do not care / if you are flesh or straw” and “the sun, the wind, the rain” which will “make fast work of you until your pie-pan hands / cease to flutter” and ultimately wonders “How long before the snow and I / take you down?”

The theme of personality development and the individual as identity-artist, treated metaphorically in this first poem’s conceit, is addressed more plainly in subsequent poems. In “Self-Portrait (Gay Son of a Preacher),” for example, the speaker desperately seeks redemption for, perhaps even salvation from, identity elements he has been taught to be ashamed of through such traditional religious concepts as baptism (“washed seven times in the river Jordan”) and communion (“He rises, joins the altar call”). In fact many of the poems in the first third of the book chronicle the speaker’s increasingly desperate attempts to reconcile his identity with the demands and expectations of a world that denounces and even disallows that identity, forming a collective narrative of a difficult childhood marked by taught shame and a reluctance to accept oneself because that self is deemed unacceptable to others. Thus in “Wicker Man” the speaker reflects, “if you believe the talk, you know your kind was consigned to the fire by God in the cities of the plain.” And in “Called colored, in my youth,” he explains, “I already knew I shouldn’t want to play with those boys, shouldn’t // want boys of any color the way I wanted the oldest of them.”

As the book progresses, the speaker experiences exile and loneliness, as in the beautifully simple-stated “Since they put you out”:

no chair receives you,
no bath invites you,
no stove pot simmers
you to supper, no mattress
gives to cradle you,
no down rises to fill
the empty spaces.

Eventually, with much work in the realm of human emotion including the losses that teach us better how to love, the speaker is able to move beyond the taught shame, the loneliness, and the uncertainty of a disallowed identity towards self-awareness, acceptance, and love of self and others. In a book of wonderful poems, the most wonderful embodies this entire process. “Snow falls in Hartsville,” is a brilliant linked sonnet sequence about love, self-knowledge and acceptance, illustrating how we come to be and accept who we are, narrated so evocatively that readers can’t help but feel, despite the uncommon details, that the speaker is relating their own story. Indicating the speaker’s arrival at the fulfillment of the self-discovery process, the poem concludes:

Now, I’d like to believe
I’m the man I was always meant to be—leaning in
to my lover, to my life, to the wonder
of having once been a man who loved a woman
who was almost the perfect man for me.

This vital story of self-realization that constitutes Waxwings is expressed through luminous, original, and breathtaking imagery and symbolism that make the book, regardless of subject-matter, just good poetry. Thus, in “Waxwings,” we hear of “thirty-seven waxwings / necklacing the telephone wire” who suggest to the speaker the possibilities of human collaboration and love as he imagines his disparate classmates “joined together in a star of arms and legs / that kaleidoscopes in the blackness” and longs to respond to the poetic urge developing inside him, to “read their characters on the white sky // until he understands, until they become a story / he can share.” And in “The Swan,” we see “one lone swan // chalked on the surface of the black water.” And in “Burning the Peach,” as the speaker prepares for the loss of a loved one, we know how it feels when he tells us, “Black smoke made invisible by the night invaded our throats, settled inside us like an unwelcome truth.”

Sometimes these days it seems popular culture suggests that drama is only conceivable against a sensationalistic backdrop of vampires or a zombie apocalypse or a teacher-turned-meth-cook. It’s refreshing to see real, familiar human drama, the drama of one’s struggle to enact selfhood, treated with the honesty, dignity, respect, relevance, and insight our lives, our human processes, truly deserve. Simply put, for both the process it dramatizes and the poetic brilliance it exhibits, Waxwings is the best book of poems I read in 2012, one that should be read by all, and one I will return to to read again and again.
Posted by Unknown at 7:57 PM No comments:

First, I'll be on Wordplay with Jeff Davis this Sunday at 5:00. You can listen to it live at http://www.ashevillefm.org/wordplay or recorded at the same url for a week afterward. After that, you would have to wait until Jeff gets it added to the show's archives (which he'll tell you can take a while -- in fact, this is my fourth appearance on the show, and only of them has been archived so far).

Then, here is a flyer for my reading with Rand Brandes and Susan Woodring at the Bethlehem Branch Library on 2/28 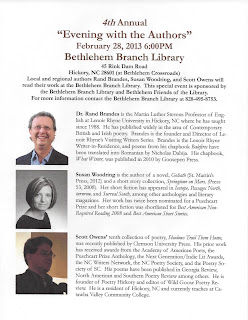 In the midst of everything going on with Shadows Trail Them Home, my new collaboration with Pris Campbell just published by Clemson University Press, Joe Young has put together an exhibit and reading for us based on our 2012 collaboration, Country Roads, Travels Through Rural North Carolina at the Burke County Arts Council. The reception, which will include a reading and discussion, will take place next Friday, February 8, 2013, at 5:00. Prints of Joe's photos and copies of the book will be available for purchase. The gallery is at 115 Meeting Street in Morganton. Here is a link to their website: http://www.burkearts.org/?page_id=33
Posted by Unknown at 5:22 PM No comments: