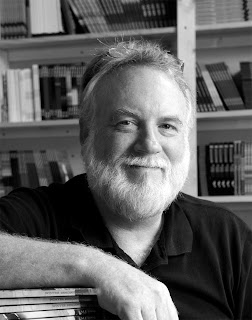 Anyone who has ever worked with Scott Douglass knows that he is no saint if sainthood necessitates the qualities of eternal patience, total abstinence, gentility of speech and manner, and holiness, whatever that means. If, on the other hand, one’s definition of sainthood focuses more on such things as “wonder worker, source of benevolent power, intercessor (in this case, between poets and their potential audiences), and selfless behavior” (all part of theologian, John Coleman’s definition), then no one is more deserving of the title Patron Saint of Poets, than Scott Douglass.

In Muriel Rukeyser’s poem “Waiting for Icarus,” the character of the mother says: “poets [are] a trashy lot” and then “[those] who love such are the worst of all.” It was just such a love of poetry and poets that nearly 15 years ago led Scott Douglass to the painfully difficult decision to give up a rewarding and personally satisfying career as a dental technician to begin publishing poetry. He thought that editing a journal and operating a small press would both help other poets find audiences and stimulate his own creativity. He has written and found publication for hundreds of his own poems, including 5 books, but e quickly discovered that most of the creativity being stimulated was spent on the editing, production, marketing, and distribution of other poets’ work. Fortunately, for all of us, he usually found the selfless work of helping others perfect their poetry, achieve publication, and connect with their audience personally satisfying.

Since the first Main Street Rag chapbook and the first issue of Main Street Rag, the magazine, in 1996, Scott has edited 59 issues of the Main Street Rag and published somewhere in the neighborhood of 800 individual books, many of those as part of MSR’s annual chapbook competition begun in 1999 and annual book competition started in 2001, both of which provide substantial monetary awards to the winners. That record of publication comes out to more than 50 titles per year, roughly 1 every week. Is anyone else anywhere publishing that much poetry? Most of the poets I know don’t even read that much poetry.

A very rough analysis of MSR’s titles reveals that Scott has published books by authors from at least 30 different states and 4 different countries. True to his roots, however, Scott’s largest source of authors, by far, has been North Carolina. He has published books by more than 60 authors from this state, including both the well-known and the brand new, and they have all been of the highest quality from both a literary and production perspective. MSR books have received awards from virtually every competition out there, including the Oscar Arnold Young Award in 3 of the past 6 years.

And Scott hasn’t stopped in his quest to have a meaningful and lasting effect on the world of writers in North Carolina. He has also undertaken the production work for many other journals, publishers, and organizations, including the production of Bay Leaves since 2004. And to further help poets connect with their audience, he has helped organize and sponsor 6 reading series in Hickory, Raleigh, Chapel Hill, Fuquay-Varina, and Kansas City, MO, and coordinates writing workshops at a variety of venues across the state.

Poet, Editor, Publisher, Publicist, Activist, Dental Technician, and friend, Scott Douglass has borne many titles well. The Poetry Council of NC is honored to recognize the invaluable contributions he has made and continues to make to this organization, to poets across the state and the country, and to the world of poetry in general. For all of these contributions, we dedicate the 2010 issue of Bay Leaves to M. Scott Douglass, who perhaps after all, should hereafter be known as Saint Scott.
Posted by Unknown at 6:27 AM