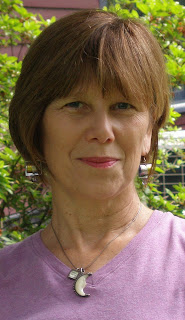 There is only one poem from Debra Kaufman’s new collection of poems, Moon Mirror Whiskey Wind, that I would want to reprint here. Not because the book isn’t full of quality work--it is--but because this particular poem is so strong that it stands out among the best of Kaufman’s poems, just as it would among the best of anyone’s.
The poem is called “A Marriage,” a term which any poet will tell you comes pre-loaded with significance as it is a term often used to describe the way in which poetry works, marrying one thing to another through metaphor, analogy, and other forms of association. In this particular poem, not surprisingly, the term carries not only that figurative weight but the literal meaning of also being simply about a marriage.
There is much to admire in this poem, as there is in the collection as a whole, but my favorite aspect of “A Marriage” is the way in which each of the poem’s three “characters” (man, woman, and that same woman after self-actualization) are fleshed out phonetically. As you’ll see below, the man is characterized by 2-syllabled, short-voweled dentals; the woman, on the other hand, initially by long-voweled words that hum, and eventually by 3-syllabled words full of liquids that move from long to short and back to long again. The poem is a fantastic lesson in just how much meaning and emotion can be carried by the mere sounds of words.
It comes as no surprise to those who know her career that Kaufman is capable of such virtuosity in her poetry. After all, she is the author of four collections of poetry, the recipient of numerous awards for her writing, and a longtime active participant in such organizations as the North Carolina Poetry Society and North Carolina Writers’ Network. Originally from the Midwest, Kaufman has lived for the past twenty years in Mebane, NC. She will visit Hickory on October 13 to read in the Poetry Hickory reading series beginning at 6:30 P.M. at Taste Full Beans Coffeehouse in downtown Hickory.
Here is the poem, “A Marriage,” in its entirety.

In his stories
he was always
the hero; she
the damsel in hers.
this is how families
are born. And endure.

The hard d’s of Dad
with its short a so brassy,
the soft yum of Mom,
her scent of cinnamon.

His crewcut, her creamy hands,
his steely eyes; her mind
drifting away to some airy
kind of heaven where
she glided beside Jesus
and above them sang thrushes,
where she was no one’s wife
or mother, where she was prized
(o rosary, poetry, reverie!)
for her pure soul self.
Posted by Unknown at 3:17 PM